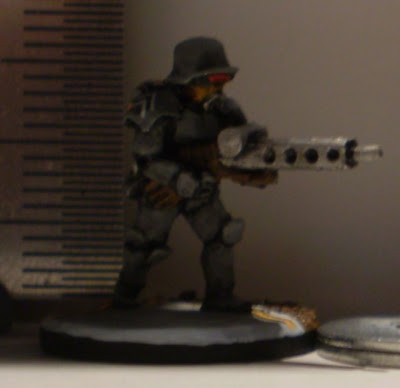 This Enclave will be one of the vault cities lying close to the highly contested Dead City. Seeded with propaganda before World War IV, this vault was an experiment by Dr. Winterbottom to preserve clean genetic stock in an irradiated war torn post apocalyptic world.

The occupants of the Enclave are far from the ideal Aryan stock envisioned. However, they are free from mutation and have adequate military and medical resources to remain so. Whether that is a good thing or not is yet to be seen.

Their main enemies are the Super-Mutants, created by The Master (Richard Grey). But the Aryan's will cleanse any other survivors existing untainted in pockets of civilisation untainted by radiation poison.

Aryanriech Enclave has some of the best military resources in the region and would dominate it, if it was not for their strict genetic policy that keeps their population low.

I'll be using the Eureka Sci-Fi Germans for this faction. They only come in 4 sculpts at the moment, but i've joined the 300 Club in hopes of getting more. Click on this link to join the 300 Club and we can have additional sculpts! These guys come in at 15mm from feet to eyes, and i love 'em. I hear some people are using them for pulp games to.

At the top of the post is one i prepared earlier. I have 2 squads of 8 all up. The rest of this squad should be done soon, and i'll be sure to give you an update.
Posted by Lee at 11:48 AM