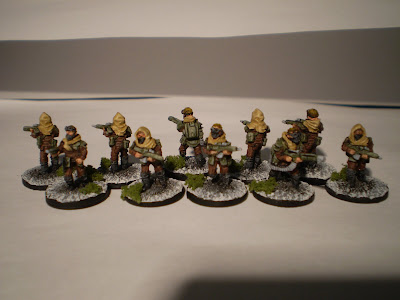 These Sahadeen infantry are from Rebel Minis. They will be part of an exmillitary raider group called; The Wolf Pack. They will have there own Reaction Table for 5150/CR3.

They did satisfy me once painted, but they do pale in quality compared to the new GZG offerings. The commnader has a static if not strange pose. And some of the infantry are not up to GZG's standard. I do like these guys however and have found them to be the most fitting mini's i have to the PA setting.

The Wolf Pack act as a sort of Wasteland enforcer group, that taxes the various communities in water, food and conscripts. They are ruthless when commanding obidence from the wasteland towns. The only town to be rid of them proper is Babylon, which is protected by the New Eden funded gang, the Buckeroos. The Enclaves prefer not to tangle with these guys due to thier armaments and training. Considering thier equipment, The Wolf Pack must still have access to a stash of WW 4 era vehicles and weapons.
Posted by Lee at 11:52 AM