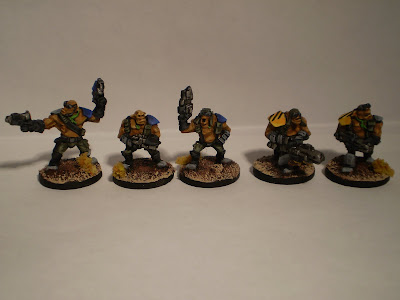 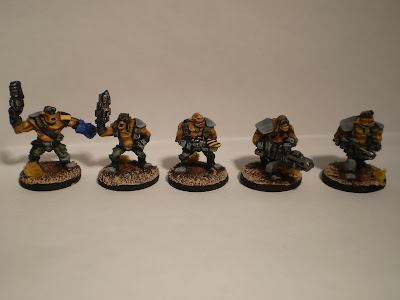 These were quite the pleasure to paint. If i wore a hat i'd take it off to GZG as they really show what can be done in 15mm.

So i've borrowed the concept of the Super-Mutants from the Fallout series of games. They are a great non/semi human faction to have before you start moving onto aliens.

These guys have no allies in the DC 2150 so they must be very resilient. Their Reaction chart will reflect and willingness to engage in hand to hand combat and a general superiority in that form of combat. They won't be the best of shots, but will use their SAW's to keep heads down as they get close.

To accommodate a bit more hand to hand in the THW rules i've had to make some changes to the rules. It's near suicide at the moment. :) Receiving Charge reaction will be toned down alot and i won't require the chargers to take Recieved Fire checks if they have passed the Wanting to Charge reaction on 2d6. Also, i'll be making Assault Rifles or larger bulky, which translates as 1 less d6 in combat. This last rule will also make SMG's and Carbines a actually option over Assault Rifles for some Factions.
Posted by Lee at 11:59 AM